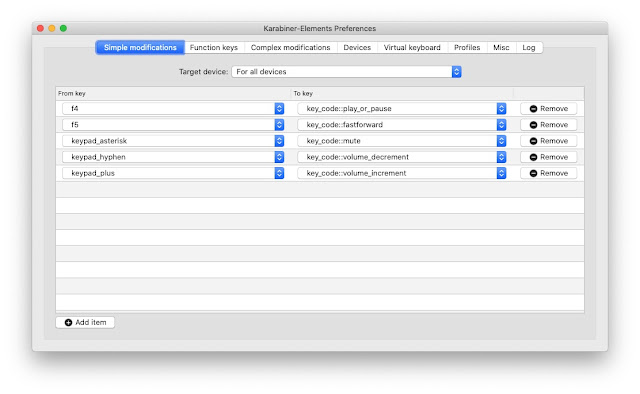 No other tools (no MacMediaKeyForwarder etc) required.

Doing this on a Samba server will avoid problems when accessing NFD filenames from a Mac.
Eingestellt von icode um 23:48 Keine Kommentare:

One can use Python as a universal converter on the command line like this:

I recently tried to find out the limits of my 1&1 virtual server L. The official resourse was not very conclusive about the problems I was experiencing (out of memory errors):

The root cause was out of processes, and later I apparently ran out of iptable entries.

I finally found that "cat /proc/user_beancounters" shows all the available resources and imposed limits of the Virtuozzo virtualisation. For my quite old Ubuntu 14.04 these limits were significantly lower than what is advertised on the Link above. This may be because the virtual machine was set-up before new limits have taken effect.

The limits which are most relevant to me are:
- numproc: Max. 100 processes (each thread counts, not just processes in the UNIX sense).
- numiptent: Max. 400 iptables entries. This is usually sufficient for eveb complex firewalls but becomes a problem when using fail2ban.

In the end it was sufficient to move the ssh port away from port 2222, which was attacked a lot. The attacks on the mail ports come from a smaller set of IPs. I am currently (2019-04) using 88 of 400 iptable entries.

Find all destination ports used by TCP brute-force attacks on a server:

The above assumes that you log all stray TCP packets to /var/log/syslog with the prefix 'firewall', which can be done with this iptables rule:

Use this to fix:

The clipboard should work now again.

This monitors the current clock rate (in MHz) for each core and it also lists the TurboBoost settings depending on how many cores are used:

You may first need to install turbostat (for Ubuntu):

Ctrl-Q and Ctrl-S do not work in GNU screen

If you find that pressing Ctrl-Q and Ctrl-S has no effect at all in a specific GNU screen terminal than you most likely have accidentally switched on XON/XOFF flow control by hitting Ctrl-A F. The symptom is that you cannot save using Ctrl-X Ctrl-S in Emacs, and you cannot use Ctrl-Q for quoted-insert in Emacs. The Ctrl-S and Ctrl-Q keys are silently ignored.

To make the Ctrl-S and Ctrl-Q keys work again you must disable flow control in screen: Press Ctrl-A F until "-flow" is displayed. Now the behavior should be back to normal: GNU screen no longer handles Ctrl-Q and Ctrl-S specially and passes these to the application.

Whole disk encryption is not as secure as it sounds, due to the limitations of sector-wise access, but it is _way_ better than not encrypting the disk at all, and it usually provides solid confidentiality (meaning an attacker cannot read any information from the disk).

(There are nasty attacks on whole disk encryption, but they are all around an attacker writing stuff to the disk, modifying it contents in various ways. But if the encryption is done properly all of these attacks leave random garbage in the decrypted view of the disk.)

I am using 'plain dm-crypt' instead of LUKS since I do not need any of the LUKS features and it is very easy to set up and very easy to understand what happens.

I am also using the entire disk as one big partition, without a partition table. Encrypted partition tables do not make much sense in my opinion, and I only want one partition anyway.

If there was already (plain) data on the disk (e.g. an unencrypted backup) it is wise to erase that by overwriting the disk with random garbage:

Create encrypted layer of the disk:

(I am using aes-cbc-essiv:sha256 with just a 128 bit key since it seems sufficient for my purpose. If you are concerned that somebody might modify the contents of the disk you are better off with using aes-xts-essiv:sha256 with a 512 bit key, but I was not happy with the performance penalty for very little benefit (if any).)

The plain view of the encrypted disk image is now available under /dev/mapper/enc.


Creating an ext4 filesystem on the encrypted disk:

Now you can create a backup on /backup_disk.

When done, umount the disk and stop the encryption (which might flush a few sectors to the disk):

I recent was on an Ubuntu 14.04 machine, started a long running dd to clear a disk, and then wanted to monitor progress of this command to get an indication how long it would take.

In found that my binutils (dd) were too old for the dd status=progress feature.

Alternatively you can just look at the write file descriptor of the dd process, e.g.:

David P. Reed talks about the invention (or better conception) of UDP

Save GNU screen buffer to file

To save the content of a screen in the "GNU screen" tool to a file, including the scrollback buffer, do the following:

myfile.txt will be created in the current working directory of the screen instance you are connected to.

This is useful in situations where you think "I should have really redirected that into a log file". Of course this only works well if you have a big scrollback buffer. I have:

When accidentally printing binary data in a terminal the state of the terminal gets messed up and one needs to reset it. When using GNU screen, this is maintaining part of the terminal state as well.

To reset it:
- press Ctrl-A
- enter ":reset" and press enter

Done. You many need to enter "reset" in the terminal itself as well.

rsyslogd does not log kernel messages to kern.log on Ubuntu 14.04.1 and OpenVZ

Problem: Logging dropped packets using iptables LOG policy did not work. Well, the precise problem was, that the messages did not end up in /var/log/kern.log (nor in any other log file), but they did show in 'dmesg' and /proc/kmsg.

This one was tough. Googling showed that this problem could be solved by uncommenting the line '$ModLoad imklog' in /etc/rsyslog.conf. This in turn caused kern.log to be filled with messages like 'imklog: error reading kernel log - shutting down: Bad file descriptor'. This in turn is probably caused by some strange interaction between Ubuntu and OpenVZ/virtualization combination, but initially I did not find the precise cause of the problem, nor a solution.

This link finally gives a clue what the problem is and also presents a working workaround:

Following the solution worked for me. In more detail:

This effectively creates a shadow copy of /proc/kmsg (using dd and a named pipe) which is accessible by the syslog user.

Then adapt /etc/rsyslog.conf to use this:

Then execute the script and restart rsyslogd:

The original Brother toner cartridges for the Brother MFC-9340CDW printer runs out of toner after a programmed amount of toner usage which is of course useless. This is how to reset the toners so you can continue to print for quite some time:

Holding down shift while pressing the right mouse button in the selected area copies the text and removes all linefeeds. This is not proper cut/copy/paste of multiple lines, but works for a single long line spanning multiple terminal lines. It is better than nothing.

For some reason sometime my Intellisense changes behavior every now and then (probably a Linux Keyboard shortcut entered in VS). To fix this:

1. Type something so the Intellisense Popup opens.

2. Press Ctrl+Alt+Space to toggle whether the suggestion should have the focus or not.

Goal: Let Volumio 1.55 automatically start playing music automatically after the Raspberry Pi is powered on. The RPi is used completely headless and without any buttons, and while it is fine that I can control it through my phone or a computer, I sometimes just want to start the music on random play by flicking a plain old power switch and nothing more.


After a lot of fiddling with /etc/rc.local I realized that the NAS is mounted only after my commands in rc.local were executed. A sleep may help, but rc.local is killed if you sleep to long ... argh, nasty!


Instead I decided to hardcode the autoplay into the PHP scripts directly. I don't know any PHP, but how hard can it be?


The amixer line tries to force 3.5mm jack audio output. Not sure this works. Omit it if you use your own DAC or HDMI.

Not sure the sleep(5) is necessary. This is actually not specific for NAS and should work with any source. It should play the playlist which was last active.


I would love to have this in the GUI, but I do not know how to hack that in.


Ah yes. Completely unrelated and just so I do not forget it: To get my TL-WN725N WLAN Dongle working with volumio 1.55 I had to download the firmware for it:

The title says it all. To get the telnet escape char (^]) in a Mac OS X Terminal, for example to quit telnet, you have to type Ctrl+Ü on a german keyboard.

My Samsung SSD 840 EVO was suffering from the apparently well known problem that 'old' files (files which have been written a long while ago and not touched since) had slow read transfer rates (as low as 5 MBytes/s in places, 29 MBytes/s for some big files I had).

I have a Zotac server without a CD drive, so I needed to run the Samsung Performance Restauration tool. I used the DOS / Mac variant which is a DOS bootable disk which contains the update tool. The easiest way to prepare the USB stick is NOT to use the USB zip provided by Samsung but to use the *.iso file (Samsung_Performance_Restoration.iso) instead:

- Mount the ISO file and get the file ISOLINUX/BTDSK.IMG from it.
- dd the BTDSK.IMG directly onto a USB stick
- boot from the USB stick and follow the instructions

On my Zotac machine when booting from this USB stick I got a couple of broken error messages about not being able to boot from device XYZ, but it booted OK from the stick after a couple of seconds.

Both SSDs were not erased by the procedure.

Avoid hang of headless Zotac server on Ubuntu Linux reboot. (How to disable the graphical console for grub and the Linux kernel.)

My Zotac server did not reboot without a monitor attached. Booting from power-up did work ok. The graphical console of grub seemed to be the problem. Since I do not use the monitor output at all not setting any graphics mode at all and using the 80x25 default console is fine for me. This is how to disable the graphical grub console:

In addition I disabled setting any graphics mode on the Linux kernel and setting the timeout to 1 second.

Reboot time: The time between pressing enter after 'reboot' and being logged in again with ssh is 25s.

On a german keyboard the key binding for 'quit' on GNU screen does not seem to work for me (on Max OS X). But one can simply invoke the quite command directly through the command mode:

Save screen scrollback buffer to file

For me this saves a lot of leading blank lines, but this is ok.

Assuming you have a PDF which has certain restrictions on it (for example you cannot edit the PDF using Preview in the usual way), but which you can print, this is how you can strip these restrictions from the PDF:


Note that this procedure does not allow you to strip passwords from files which you cannot print without a password. The restricted file must at least allow you to print the file.

Also, to see additional information about the currently active wireless connection hold down the Option key while clicking on the Airport Symbol in the menu bar.